Najnowsze:
You are at:Home»About us

Gazeta is the leading Polish language newspaper in Canada and the best key to the dynamic and upwardly mobile Polish-speaking community in Ontario and other major cities in Canada.

It was created as a first independent daily in Canada in 1987.

Gazeta used to be published three times per week in Southern Ontario, while its National Edition it was printed weekly. In September 2014 it turned into a weekly responding to the situation on the market, while at the same time expanding its online daily edition.

Gazeta and its editors have received many awards, both Canadian and Polish. 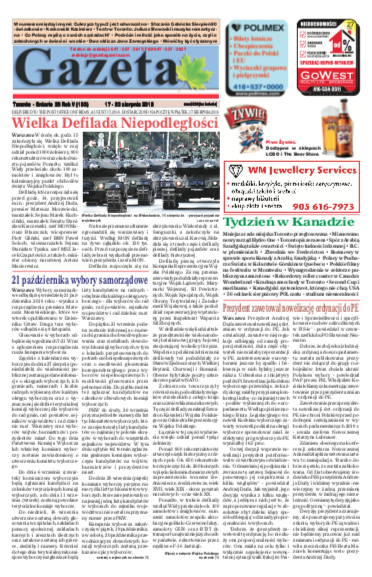 www.gazetagazeta.com was launched in 2003. It is read all over the world – we have readers from 123 countries.

We do not publish news and information which can be found everywhere – that can be read on every news website.

Gazeta is published in Polish, but we have heard on many occasions that unfortunately, it is not accessible to those who are interested in Poland, but do not speak Polish. These are second or third generation Poles in various countries, our non-Polish friends, spouses and their families, who would like to learn more about our fascinating country of origin.

And this is how we came up with the idea of Polonium.GazetaGazeta.com. It provided links to Internet news and articles written in English about Poland – a fascinating insight for English speaking Poles into the way Poland is presented in world’s media.

More about Polonium and about its name

POLONIUM is not operating any more as it was transformed in 2016 into award-winning POLcast, which reaches 112 countries – read more about POLcast and our awards.

Considering that there many of our readers are interested in materials about Poland IN ENGLISH, we have established a close link with Cosmopolitan Review, a journal focused on issues of social, cultural and historical interest by English-speaking writers for English-speaking readers throughout the worldwide Polish diaspora, established in 2008.  More about CR.